The Present is the Past's Future

Who would not be fascinated to know what his life will be like in 15 years? Yet time will satisfy our curiosity about the future so slowly that we will never gain much pleasure from learning the outcome. To quench my curiosity now, I travel back in time instead of forward. My present life is the future secret that some self of a prior decade longed to look into, and now I know the outcome and need only recall the curiosity. I imagine myself in high school wondering whom I would marry, where I would live after college, and what my job would be, so that I can pull the curtain of time and flood my remembered ignorance with insight. My accurate and failed predictions equally fascinate me: I am, and am not, who I planned to be.

The mind is a phasic receptor, only noticing a sudden stimulus. We are unconscious of who we've become because we became who we are too gradually. Forgetting is a trick for remembering.

Against Living in the Present

In the weekend's pause, I read a Balzac novel and emigrate to history for an afternoon. I think of the great populace of the dead, see my life in the context of Life, gain depth of emotion through breadth of imagination.

As travelers in foreign countries think fondly of home, we must be conscious of other times to love our home, the moment. Living fully in the present requires living partly in the past.

The Poignancy of the Particular

Today while reading a book by Santayana, acquired from my late grandfather's library, I found an old hotel receipt folded in fourths.

I imagine my grandfather, not much older than I am now, reading Santayana by his hotel window, above the muffled shouts and beeping of New York streets. He marks his place with his receipt, but fifty years later, I, not he, resume his reading.

A crumbling receipt is a durable memento precisely through not intending to be. Posed photographs of my grandfather merely link me to his generic representation, but a dated scrap of paper captures the real man, caught unawares in a moment of casual existence.

Likewise, antiquity's great monuments are not as touching as the hair combs, spoons, and wash basins dug up from buried villages by archaeologists. By recalling the dead in their ordinary lives, the least significant objects make the most significant memorials. The present's routines become the future's relics.

Time Passes So Quickly Because It Passes So Slowly

Oddly, long periods of time go by faster than short ones. From the vantage of Monday morning, Friday evening seems hopelessly distant, yet on turning thirty, eighteen feels like a minute ago. The hours creep but the years fly. Look closer and you find that the years fly because the hours creep. The slow repetition of days and weeks lulls us into thinking time is stationary, then one day we find the days have made a decade. The train left the platform too quietly to notice, and now we glance up to see our hometown gone, new country all around us.

Plato taught that appearances change while underlying reality remains unchanged. It is exactly the opposite. Appearances seem stable, but the ground beneath us is shifting.

Waking today to my twenty-seventh birthday, I caught my first glimpse of middle age. Last year I was twenty-six, which leans against twenty-five, which means scarcely out of college, still hoisting one's sails, all seas untraveled. But twenty-seven tips and falls toward thirty, which is another era entirely, suggesting children and yard work and settled plans and life figured out. In high school I had a recurring dream of taking a test and realizing the time was almost over, though I was still reading the instructions. The dream was prophetic, for though I've only had time to complete an education, which is reading life's instructions, I have already blazed a third of the way to mortality. My future has shrunk from infinite to countable. Whoever can count his money has too little of it.

The Solace of a Stock Chart 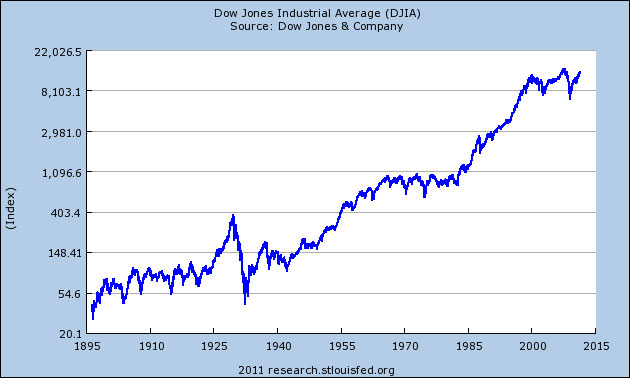 Looking at a long-term stock chart of the Dow Jones Industrial Average, I gain a sense of continuity across change. Decades of chaotic current events are condensed into an oscillating line. My finger follows the Great Crash of 1929, ascends with the post-war boom, zigzags through the recessions and oil crises of the 1970s, soars with the technology bubble then dives with the housing bust. Events that, in the moment, felt infinite because they took up all the space of the present, are in hindsight tick marks in the giant patterns of history. The traders who made the line rise and fall on the left of the chart have all lost their fortunes and entered the poorhouse of death. But greed and fear persist eternally, and now new traders move the line. Buying and selling for self, they plot a collaborative graph, as medieval masons added stones to cathedrals their ancestors started.

The narrative of history we write with our lives forgets us, recording only our aggregate effect on the world. Perishable individuals collectively shape world trends as drops of water, each bursting inaudibly on pavement, create the rhythmic sound of rain.

The Continuum of History

Reading history can feel like reading fiction in that the historian depicts a world that does not exist for us beyond the page. From the modern world of aircraft carriers, skyscrapers, oil refineries, and the United Nations, the ancient world of Roman Emperors, Visigoths, chariot races, and polytheism seems separated not merely by chronological distance but by an ontological rupture. The past feels like an alternate universe, connected to the present only by the accident of a common setting, as fiction is linked to life by taking place in factual locations, though no path leads from our world to the novelist's.

Looking at my high school yearbook gives the lie to this conception. There I am as I was, living in another and now lost world, yet the fifteen years' journey from there to here did not require crossing any chasms nor tunneling through wormholes, but only the steady arrival of tomorrows. With this realization, I gain a line of sight back to the time of togas. The distant past became the present via the smooth, paved path of days. Epochal change is the work of the small, familiar quantities of time our clocks tick off. Knowing how minutes pass, we know how millennia pass.

Time Scatters the Remains of History

We want to get to the place where history happened. We feel nearer antiquity when we stand in the Roman Forum, though we have only moved nearer in space, not in time. We are moved by an empty field of grass because a Civil War battle was fought there once. We travel great distances to museums to see original paintings that we have seen as clearly and without the crowds in reproductions, because our eyes must rest on the canvas the master's hand touched.

But does the body of history lie in the shrines where we seek it? Space is as restless as time. After one hundred fifty summers of new growth, the grass in the Civil War field is not the grass the soldiers stood on. The museum's famous paintings glow with oil pigments from the restorer's, not the artist's, brush. In the Roman Forum, we walk upon the dust from prior visitors' shoes and breathe the air that they, not the ancients, exhaled. Caesar's dust has likely disappeared from Rome, but we may find it in our garden when we get home, if the winds of two millennia have blown it there.

Eras Die With the Elderly

At the funerals of the young, grief is raw and chaotic. Young people being the limbs and liveliness of the world, the death of the young amputates the world, and the mourners' grief is like the howling of an amputee. In contrast, the funerals of the old are more solemn than horrific. Why beat one's breast at the inevitable? On closer inspection, this solemnity for the old is a muted grieving for the young, that is, for the young of fifty years ago, on whose world the barely cracked door claps shut when the elderly die. Fifty years ago, the hunched and white-haired hobblers of the present were in their prime, making laws and making loans and making love, when today's movers and makers were still asleep in the lampless anteroom of the future. The sun shone on a world that, with the elderly's death, no one left living now remembers except through lifeless books and black-and-white photographs. As the coffin is lowered, not so much a person as an era is laid to rest.

We Love Our Life in the Wrong Order

Each stage of life greatly pleases us, but unfortunately not while we are in it. The young are eager to be adults, adults look forward to being retired, the retired envy youth. Daters crave marital stability, the married miss the thrill of dating. College students and graduates would swap places. We possess the pieces of a happy life, too bad we cherish them out of sequence.

A book I am reading notes that the idea of being "modern" originated in the Middle Ages. It is odd to think of flagellating monks and Canterbury pilgrims regarding themselves as modern. Even odder to think how, like them, we moderns will one day seem medieval. In a few hundred years, today's books will appear silly with their solemn talk of the modern world. A book about recent trends in capitalism will sound as contemporary as a book about recent trends in feudalism. "The War on Terrorism" will have the ring of "the War of the Roses." Solar energy will be as cutting edge as firewood.

We are Conquerors of Space but Captives of Time

Space is the dimension of human greatness, time of human nothingness. Space is a dimension under constant conquest. The wheel, ship, chariot, train, truck, and space shuttle are humanity's inventory of ever-improving weapons. Born on a clump of grass in the African savannah, we quickly spread out from Spain to Siberia. When we reached the edge of Australia, undeterred, we rafted to Hawaii. When there were no more oceans to cross, we made the moon our mission. Today, with television and the internet, rather than travel we command the world into our living rooms. Yet, to complement these conquests of distance, what single victory have we scored against time? Though technology can get us to New York by lunch, it cannot slow one tick of the clock's countdown to death. Our freedom in space is like a bottle's freedom to roll side to side on a conveyor belt carrying it toward a trash heap.

Mr. Stanley’s Aphorisms and Paradoxes are outstanding examples of the long-form aphorism... inevitably studded with discrete individual aphorisms that could easily stand on their own.

-James Geary, author of The World in a Phrase: A Brief History of the Aphorism